B.W. Huckleberry decided to contribute a selfie this week along with the Kitties Blue at The Cat On My Head for Sunday Selfies. He and his housemates love covering all of my registers in the winter. You’d think it was cold in here. . . it is too! 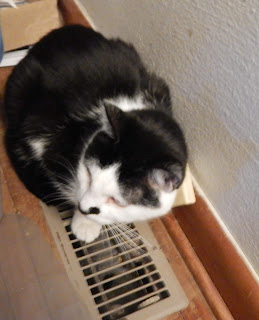 At least we are out of those frigid temps we had earlier this month. It looks like we’ll be having normal temps for the foreseeable future. And the snow has stopped after three straight days of it.
Yay! I’m thankful that Two-y is no longer outside.

I should give you a couple of updates. First, Two-y went in for his one-year check-up last week and passed muster. He was even a very good boy for his rabies vaccination. His veterinarian commented on his teeth. Because he’s still getting used to being a housecat I haven’t been brushing his teeth and they are very dirty. Guess it’s time to do that now.

Second, I’ve been delinquent in telling you all how Mulberry Spot has been doing. Well, I’m happy to report that he is doing very well. He’s been on the budesonide for quite some time now and has only had one incident of diarrhea. He’s eating very well and not vomiting. I even caught him eating some of Two-y’s food one day and spent the day waiting for him to vomit. But he never did! He’s still on his Ultamino though. I hate the thought of going back to his daily vomiting sessions.

Today’s post is short and I hope sweet. I just want to wish everyone a Merry Christmas. I also want to say Happy Birthday to me (on Wednesday)! That’s not too self-absorbed is it? Nah, I think it’s okay.

Joining me in this post is Gooseberry. He’s always nearby so easy to catch with a photo. I’m afraid my camera is too big for him to work so I had to take this picture for him. We’re joining Kitties Blue at Cat on myHead (thanks for the Christmas card!) for Sunday Selfies, though it really isn’t a selfie. We’ll just pretend, okay? 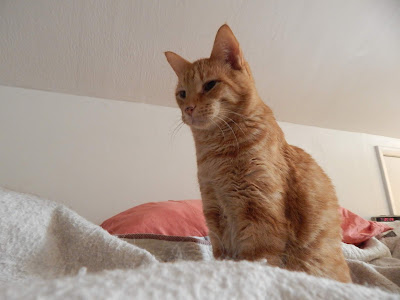 We all know by now that obesity is a real problem in the world. But did you know that it’s a problem nearing epidemic proportions (I may be exaggerating) for our pets? It’s not only an aesthetic problem, who wants a tubby pet? It can mean health troubles too.

Chubby pets are more prone to diabetes, arthritis, liver disease and pancreatitis. It can be a self-motivating factor as well. The fatter your pet, the more weight he needs to lose, the harder it is to get him to move and thus lose weight.

But wait a minute! Losing weight too quickly can be a bad thing too. Always work with your veterinarian to begin a weight loss program. Incorporate a decrease in food intake, increase in activity and frequent (weekly) weighing sessions for a successful program. But your veterinarian can help you decide what type of food you should be using and how much you should be giving. He/she will also help design a proper exercise regimen. By weighing frequently you will see how much loss (or gain) is happening and if it is too much you can adjust right away.

With dogs it is easy to plan a walking schedule and route in order to get in enough exercise. You can also include play sessions to make it more fun. On bad weather days I used to throw my dog’s toys up the stairs and he get exercise running up and down the stairs. He also had a cadre of tricks we’d go through all the time to keep his mind busy. That’s another side effect of exercise!

For cats you might say, I can’t make my cat exercise! Ah, but you can. Many cats love to play fetch with their favorite toys. That’s one possibility but you might also try using a wand toy. They prefer it when you are involved in some way. Other times you can bring out another favorite toy that they haven’t seen in awhile. I guarantee they’ll be intrigued by it. (Always keep some of their toys hidden in a closet or some other place they can’t get to so the toys seem new when you bring them out.)

Timing is important too. One play session we have is right before their last meal before bedtime. I use a wand toy, moving it up and down the stairs and they all partake in stair running. Then they eat and go to bed. I don’t have much trouble with my cats getting me up in the middle of the night because I tire them out and feed them before bedtime.

As for the variety of diets that purport to be for weight loss, I’ll leave that up to your veterinarian and you to decide. Some are high in fiber, some are low protein and some are even formulated to help your pet metabolize it better. I’m not a nutritionist so I wouldn’t even try to tell you about all of those.

Now, I’m again joining Kitties Blue from The Cat on my Head for Sunday Selfies so here’s the selfie for this week. It is Two-y behaving like a domestic cat instead of a feral. He is starting to fit in more and more every day.

Every once in awhile I get to looking at some photos and wonder what they'd look like in black and white. I switched the following photos from color to black and white and really like the looks. 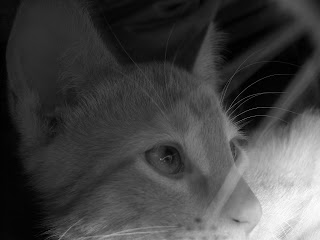 This one is of Gooseberry back when he was known as Trucker, his temporary name, until I decided to keep him. He was such a cutey and quite lovable. Still is. 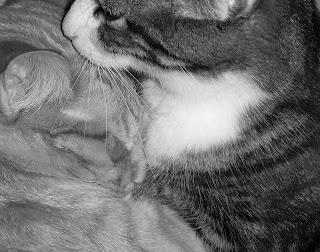 This photo is of Gooseberry again a few years later with the late Lady Butterfly in one of their closer times. They didn't always get along. But when they did it was adorable.

Again this week we're joining The Cat on my Head for Sunday Selfies. Hope these older photos fit in.
Posted by Andrea at 11:29 PM 8 comments: Links to this post