The calls of cats passed were too strong for my sweet Lady Butterfly to ignore. She joined them this morning floating where butterflies and Bluebirds fly over the Rainbow. I can only pray that Mewdy Blue’s dream message the other night is true: she is happy and healthy tonight. If only I could be so happy. 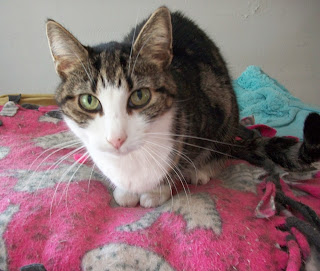 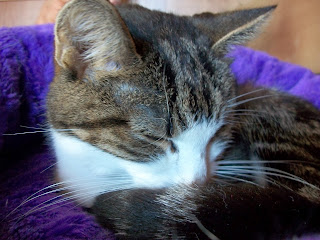 Almost 20 years ago I lost Gabrielle’s Galaxy, my best friend Gabbie. Two years later my precious baby boy Misha Baryshnikat joined her. The reason I bring this up now is because the other day I found myself calling their names as I looked for Lady Butterfly. I’m not sure if it is a case of a “maternal” mixing of names or if, just perhaps, those two are now hanging around Lady as she struggles with the late stages of kidney failure.

I sometimes feel as if my life is in a downward spiral. Year after year I lose this cat then that cat and each loss is worse than the previous one. True, I’ve had good things happen too but it’s hard to see those things when loved ones are dying.


Lady has been a tough little girl but she’s really having a hard time of it this week. I started treating her with Sucralfate to battle the high levels of phosphorus in her system, Lactated Ringers solution supplemented with potassium because her potassium is low and Azodyl to eat up all those toxins her kidneys can’t deal with. She’s been eating the Iams kidney diet as long as I mix it with water so she can lap it up but now she’s not so happy with that. This week I am giving her anything she will eat and that usually changes every day. (this morning she seemed to be happy with Purina’s kidney diet, tonight she's eating Iams Recovery Formula, what next?)

I’m just afraid that she may not make it to the end of this year. That would mean three cats this year. Then only Sky Voice is left to represent my first feral colony even though he was born in my house. But I’m trying not to look at it that way. No, for now Lady is fighting and I am helping.

It’s just that feeling I got when I called out Gabbie and Misha’s names. Are they really here? Are they trying to call to Lady? I don’t want her to go with them, not yet.

UPDATE:  It doesn't look like Lady is going to make her 19th birthday. I've been carrying her around the house today and tonight she is restless. Right now she's hiding from me. Not a good sign for cat who's usually so cuddly. This is not going to be a good night.
Posted by Andrea at 1:22 AM 29 comments:


Glitter here again. My human is just too humble sometimes. I think maybe it is an Iowa thing. We don’t usually like to crow about achievements or make a big deal out of things.

But this time I think she’s gone too far. On Saturday she came home with a box that had a really hard rock-like thing in it. She called it a “trophy” and said it came from the Cat Writers’ Association.

From what I understand this is a really big deal. Kinda like those regional awards we cats win. Maybe even bigger! So finally she has a trophy to put on the shelf with all of ours. Why in the world didn’t she post it right away?

So I’ve decided to do it for her. She won the Pro Plan Pedigreed Cats Award for her article in Cats US entitled “Harder Than It Looks”. Here’s the description of the requirements for the award:

“Pro Plan® Pedigreed Cats Award, sponsored by Purina, is presented to the writer or creator of the best entry of the year that focuses on cat breeds, pedigreed cats, and professional breeder issues including (but not limited to) health, care, nutrition, and showing cats.” (from the CWA contest rules)

In this article she described the work that goes into developing and maintaining a cattery. Sometimes I think our house should be called a cattery and all these other brats kept in cages. It would make my life a lot easier. I wouldn’t have to go around slapping sense into those other twits.

Here's what Mulberry Spot thought of the award (he always thinks he should be the center of attention):

Anyway, since today (11-11-2013) is the human’s 3rd Blog-iversary this is a well-timed award. I think we should celebrate all night long – but first I have to lock the other cats in the bathroom.